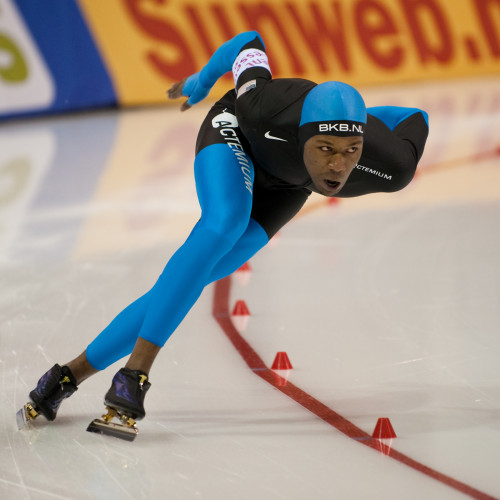 As was expected, a few surprises. Zhang from China posting a fantastic time from her very lowly-ranked position in the starting order which wasn’t beaten until the medal favourites raced in the final pairs. The slow ice proved troublesome for many, as highlighted when Lee Sang Hwa went ‘over the top’ (passed from the outside lane after the turn) of Brittany Bowe, who is no slouch. In the second race, it was Boer who set a decent time which, at first, didn’t seem like much, but it betrayed the slow ice conditions, when some of the big names who came after struggled to make it past her cumulative time. It was hometown favourite Olga Fatkulina who was the first to beat it, and with only one pair remaining and a guaranteed medal on the line, the crowd really raised the roof for her. In the last pair, Lee did what everyone kinda knew that she was going to do, and Zhang couldn’t repeat the performance of her first run, leaving Dutch girl Margot Boer in 3rd place. Sadly my prediction for 2nd place, Beixing Wang, did not perform as expected and came 7th. Lee Sang Hwa now joins a very exclusive club with Bonnie Blair (USA) and Catriona Le May Doan (Canada) of female skaters to successfully defend their 500m title, while Margot Boer becomes the first Dutch girl ever to get a medal in the 500m.

The men’s 1000m promises to be a close-fought and exciting event. Shani Davis, the first black gold medallist at a winter games will be defending his 1000m title. He was the first skater to ever defend a 1000m olympic title, and if he does it again, he’ll (obviously) be the first person to do it twice. His job won’t be easy though, as Denis Kuzin from Kazakhstan will be looking to take the title. Denis managed to beat Shani at this very venue a little less than a year ago at world single distance championships, and he wasn’t the only one. Mo Tae Bum from Korea also managed the feat. Shani is not as dominant as he was going into the last games (he was undefeated in the distance for over a year, and nobody was close to him) but Shani won’t go down easily, he’s one of the greatest speed skaters ever to have lived, and has a list of accomplishments which basically includes everything you would ever want to accomplish in the speed skating world save for the Elfstedentocht. Indeed, looking through his personal best times can have the effect of making you want to quit the sport because you wonder why you would even bother… he’s THAT good. But he’s 31 years old now, and having accomplished just about everything he might not be as hungry as he used to be, even if he loses, he’s still the world record holder in this and the 1500m and those records don’t look like they’re going anywhere anytime soon. Watch his world record here:

Others to watch for are Canadian Denny Morrison, former world record holder in the 1500m, and Pekka Koskela from Finland who is the former world record holder in this distance. Also not to be overlooked, are the Dutch, where Michel Mulder, high from his beautiful victory in the 500m might have a little bit of magic left for the 1000. Also from Holland is Stefan Groothuis, who was 4th at the last olympics and will be looking to improve on that result. I predict Kuzin for the win, over Davis by less than a tenth of a second, with Michel Mulder in third. The winning time will be… say… 1:08.60

The 1000m is a wonderful distance to watch live, because it is the event that sees the highest speeds. There are slight variations on the way that it is raced, but as a general rule, you start as fast as you possibly can, then skate the fastest lap you possibly can (Shani’s first lap when he set the world record was 24.5), then try to hold on to as much speed as humanly possible while your legs are screaming at you to stop because they’re drowning in lactic acid (his second lap was 25.2). Depending on your physiology and training, some skaters approach the event by literally going as fast as they can for as long as they can, while others measure their effort in the first lap a little bit, so that they don’t ‘drop’ so heavily in their second lap.

One factor in this which I have always found unusual is that it can make quite a difference to your race depending on which lane you start in. Most skaters have a preference for starting in the inner lane, because it means when you start, you have a longer straight in which to accelerate, then a tighter corner to build your speed up, and you hit your second corner just as you’re approaching top speed. Then having reached top speed, you get to skate around two outer corners while you’re trying to hold it, then, just as you’re starting to die and your legs stop doing all the things you’re telling them to do, you get to finish on an inner corner. There has been talk in the past of making the 1000m more like the 500m in that you would have to do two races to even out this effect. However, because it is a longer distance, these two races would have to be spaced at a greater distance from each other with respect to time, probably to the point of putting a full 24 hours between them, and I’m not sure if the program has space for that. Skaters who specialise in the distance would also have to train quite differently if such a change were introduced, though I feel with the ever increasing speeds that such a change is inevitable.

Don’t forget to click on the sochi2104 tag below to read other articles about these olympics. Also don’t forget about the ‘Sochi Specials’ of which there are now two – concerning the speed suits that the skaters wear, and today’s new addition, the difference between long track and short track.